I recently started working at Anyfin. As a new engineer on the team, I had to setup the entire development environment. Drawing my expectations from my previous work engagements I thought this would take me a couple of days. But to my surprise I had a working setup of quite a few backend services written in NodeJS, Golang and Python along side the web site and portal (Javascript) in ~5hrs. This post will explain on how we use Docker at Anyfin to setup a productive local development environment quite easily. I have seen such attempts at my previous workplaces before but none of those have worked as seamlessly as the one we have here.

The entire credit for the setup goes to my colleagues at Anyfin. I found the setup at Anyfin extremely awesome and hence wanted to share it with everyone.

Lets say we have a set of services that have the following architecture.

From the diagram we can see we have:

PS: We want the services to be exposed on the said ports in the local environment so that they can communicate with each other via those.

For simplicity, lets consider that all of these services just return the message:

The code for these services are here: https://github.com/a7ul/blog-docker-dev-environment-example

Lets run all of our services on different terminal windows and try it out.

💩 We typically face these issues with this setup 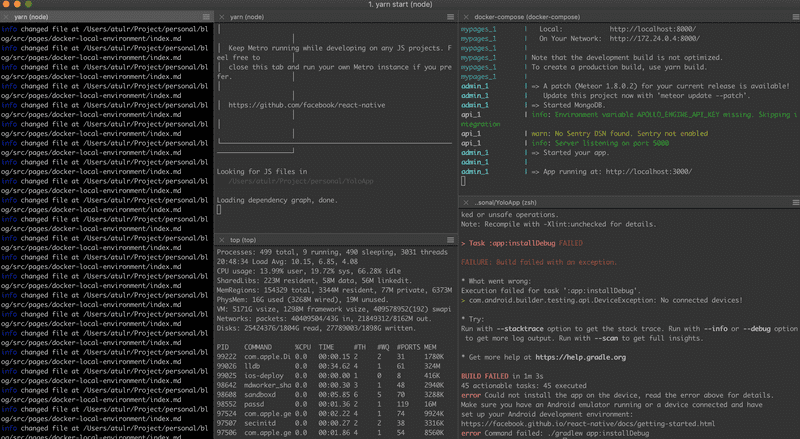 Typical terminal layout of a developer working with multiple services

All of these are frankly annoying 🤯.

Docker is a tool designed to make it easier to create, deploy, and run applications by using containers. Containers allow a developer to package up an application with all of the parts it needs, such as libraries and other dependencies, and ship it all out as one package.

To form a mental picture, for the time being just consider a Docker Container as an extremely light weight isolated linux based virtual machine inside which we will run our application service (although containers are not exactly VMs). The container will contain our code and all of its dependencies (system libraries, tools, etc). For our setup we will use one docker container per service and separate docker containers for our database.

Docker compose is a tool for defining and running multi-container Docker applications. With Compose, you use a YAML file to configure your application’s services. Then, with a single command, you create and start all the services from your configuration.

TLDR; Docker compose lets you run all your services at once (also in the right order) and manage them via a unified interface.

Docker compose in general will contain:

I have created a basic setup of services as described above. To follow along, take a clone of the repo with the following commands.

Now you should have the following project structure to start with:

You could browse through each project inside and read the README to understand how to run those projects induvidually.

Make sure you have docker running by following the instructions here https://www.docker.com/get-started.

First step is to create a docker file for our service njs1. Create a Dockerfile: blog-docker-dev-environment-example/njs1/Dockerfile

Lets take a look at what a simple docker-compose file looks like:

Create the file at blog-docker-dev-environment-example/docker-compose.yml .

Lets add our first service (njs1) to it.

The above docker compose file has only one service (njs1). We will add more services incrementally. Before that lets run it and see what we get.

In the folder which contains our docker-compose.yml run:

All this is good and fine but how can I use it for efficient development? 🤷🏻‍♀️

To make an efficient development environment we need to be able to edit the source code (which with current setup is not possible without re building container again and again). To achieve this we will make use of volumes.

Make the following changes. First lets tell our njs1/Dockerfile to not copy the project files to the container.

then tell docker-compose to mount our project directory from our local machine as a directory inside the container.

To test it out. Lets add nodemon to our njs1 service.

Now make the following change in

Time to test it out! Go to the root folder and run

The --build tells docker-compose to rebuild the images.

Try making some changes in the njs1/index.js file and you should see nodemon auto reloading on file change.

Once you add other services to the docker-compose file. It should look something like this:

There are many more configuration options which you can use in your docker-compose.yml file. To see a complete reference of those, you can visit this link: https://docs.docker.com/compose/compose-file/

Now that you have setup your services to run via docker-compose for local development. There are few commands that can help.

This will start all services in the docker-compose file and detach from the terminal. So your services can run in background.

This will only launch njs1 from the list of services in the docker-compose.yml

You can use similar commands to stop, start induvidual services as well.

ssh into a particular service container

🕵️‍ Some Tips for smoother workflow

You might notice that your services are running/launching at extremely slow as compared to when you launch them without docker-compose. This might be because you have allocated less CPU/RAM to docker service. The default values are very low and that causes issues when launching multiple services.

Low on space / messed up and want to restart everything from scratch ?

Removing all images and then refreshing the entire thing.

To remove all docker containers:

To remove all docker images:

How to use the same Dockerfile for both local development and production build?


🧙‍ Thats all folks! Thanks for reading!